When Developing World Connections offered me the opportunity to lead a team to Bhindar Rajasthan, I leaped at the chance of returning to India. I had been there many times before helping home owners build a new life with a solid roof over their heads. But this project was different.

It was not house building for one or two families but building a sub-surface dam for a whole village. A what! I here you ask, and quite rightly as that was my initial reaction. Thanks to the wonders of Google it didn't take long for me to find out exactly what I had let myself and my team in for. My next step was to check out the information provided by the DWC in-country partner Sahyog Sansthan.

The task seemed daunting compared to my previous experiences, but I love a challenge. I have to admit that the thought of digging and mixing concrete for two weeks did not sound appealing and I thought it would be a hard sell to the team. But I think the challenge and the benefits this project would have for the village,  outweighed any doubts we as a team may have had.

Then the day arrived for us to be driven to the village from our hotel, A bonus I must admit as the hotel was an old Palace run by a 21st generation family member of the original owner. We are not used to such luxury on these projects. 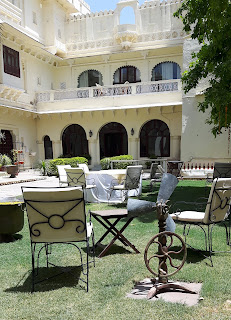 As the two 4x4 jeeps made their way out of Bhindar towards the village of Bargatua Kella it became apparent that water was a substance these lands had not seen for a long time. Dry arid fields spread out from the dirt track in all directions. The occasional block built home dotted along the roadside. Water Buffalo, Cows and the occasional dog all looking thin and malnourished, the bones of a dead Water Buffalo lay at the side of the track having been picked clean by anything that could gain nourishment from its remains. 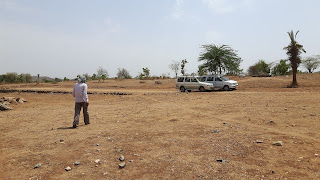 We moved on towards the village and passed a dam that had been built by a previous team. It looked impressive sitting there in the dry gully formed by previous monsoons. Last year the monsoon was very poor and there was not enough water to refill the wells let alone irrigate the land. The people in this area rely on their crop to survive. There is rarely any surplus to take to market. Without the crop they have nothing to eat. After a good monsoon season they may, if lucky, get two crops in a year. For the past two years they have only managed one. 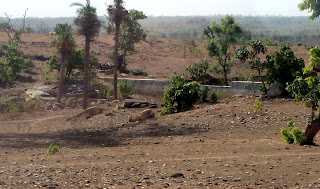 The team were silent as we approached the village, both from the effects of seeing first hand the conditions in which the villagers live and also with the prospect of starting the first days work. On arrival at the work site, a dry river bed running past the village of 187 occupants, we were greeted by many of them and welcomed to a ceremony under a brightly coloured awning set beneath a tree offering shade in the 40c heat 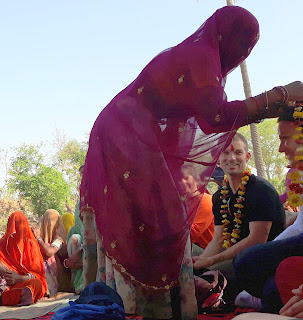 Following introductions and having Marigold garlands placed around our necks, friendship ribbons tied to our wrists, drums beaten and much shaking of hands, we made our way to the work site for our first view of the task ahead.

To our amazement, the foundation trench had already been dug by a JCB (back hoe) and I could see why. If we had to dig it by hand we may just have finished it in the two weeks we had to complete our build. It was 2 meters deep and about one and a half meters wide. There were piles of rocks of various sizes and sand dug by the women of the village piled ready for the making of concrete mortar. 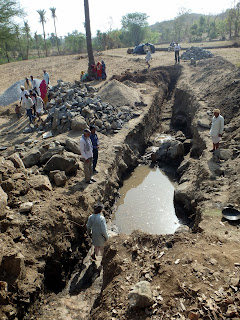 So the project begins, the team divided up into groups, some moving sand to the mortar mixing area, some moving rocks and others passing the mortar in pans through the line and out to the masons who were placing and rocks and filling in the gaps. 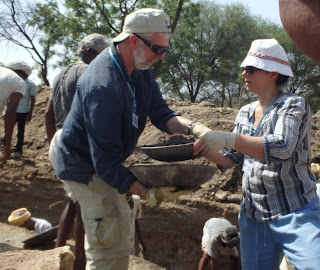 Mixing the mortar was a hot and energy consuming task, and it was continuous. As one pile was finished another was being started. The water supply for this purpose was extracted from the bottom of the foundation which had hit the water table. It was extracted by tin cans and water carrying pots and then tipped into two 45 gallon plastic drums. 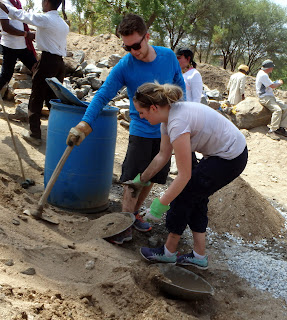 This process continued throughout the time we were there. The dam grew in height and width each day as more mortar and more rocks where placed in position. The accuracy checked by the mason, a village elder. In fact everybody on site (except the team of course) were a member of the village. 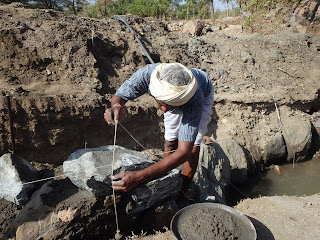 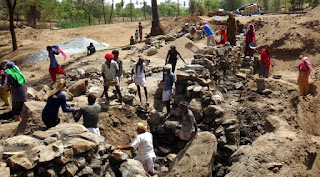 The young girls Lila and Kusum passing pans full of heavy mortar down the line and all the time smiling and laughing. 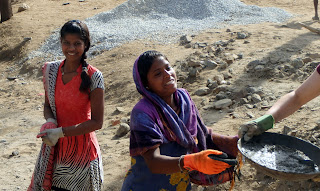 Temperatures were rising throughout the week, hitting 45c by the weekend. The team worked throughout and without complaint. In fact nobody complained about repetitive work or the conditions, we all took it in our stride. There was a job to do, we needed to get it done. 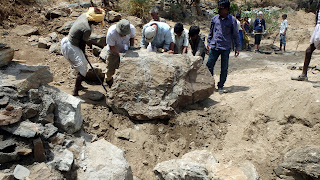 During the morning break, One of the villagers (Suresh) made chai over an open fire under the shade of the tree. 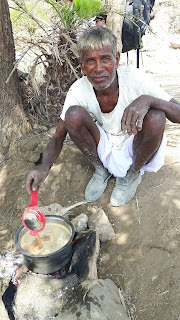 The team loved it so much that we regularly got hijacked by villagers and had to visit their homes for chai. I believe it became a competition between them as to who could get us into their home before and after work. As we drove along the dirt track in the mornings we would find a villager waiting to direct us into their home. And when we finished for the day there would be an invitation waiting for us at another house. 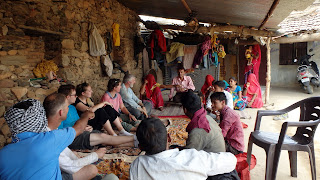 The weekend came and the team took off for Udaipur on a little R&R visiting the largest fresh water lake in Asia and sight seeing in the old town. 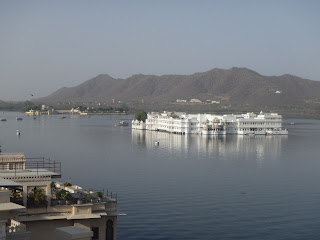 We also took in a Bollywood movie, well you just have to when in India. Returning Sunday evening to our wonderful hotel. I happened to mention to Parthvi (the 21st generation manager) that the building reminded me of the “Best Exotic Marigold Hotel” (those who have seen the films will understand). She in turn explained that the hotel used in the film was not to far away. So on an evening during our second week myself and another team member accompanied by Parthvi visited the hotel and received a guided tour and detailed explanation of the making of the films. 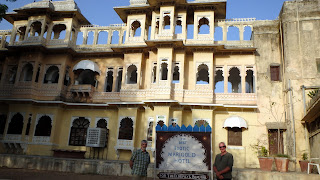 Monday came and we continued mixing, moving, lifting and laughing. More chai, and more heat. By midweek the temperatures were hitting 50c. Did this slow down the project? Not at all. In hindsight I am not sure how we all coped with that, but as each day went by the dam grew in stature and without complaint form anyone 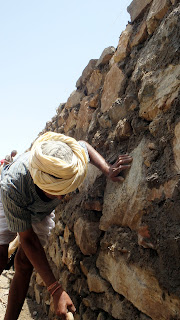 On the Wednesday we ran out of water for mixing the mortar. We had dug two additional holes to try and obtain water as the foundation was by now complete and what water there was, was no longer accessible. 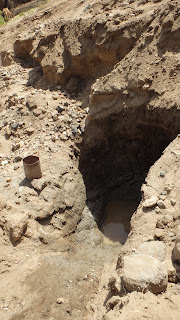 Whilst the two extra holes produced a small amount, they eventually ran dry. By the next morning there was enough to keep us going for a few hours. 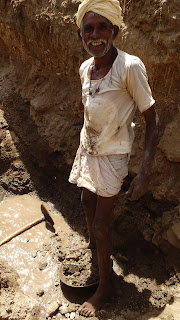 A tanker had been ordered to provide enough to complete the project but this had not arrived by the time we left site for the last time.

One evening during the second week we were invited to revisit the village for a cultural evening. The whole village turned out and enthralled us with with music, songs and dancing. 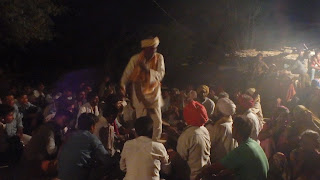 On another occasion we stopped at a nearby village to be invited to the Marriage celebrations of a young couple. Following congratulations and of course Chai, we continued with our journey home. 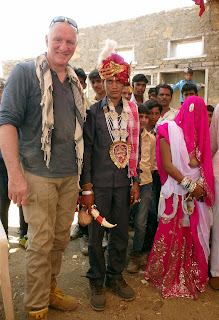 We also visited another water harvesting project funded by a UK organisation Wells for India. Dry wall irrigation and another sub-surface dam. This land is so reliant on the monsoon for its water that the ingenious methods they have developed to harvest and retain the rainfall are incredible. They need to replenish their wells as well as irrigate their land. Without these structures, the water would would sweep down the valley washing away topsoil and not actually penetrating the earth deep enough to be of use for crop growing.

With these dams in place, the water is held back long enough to penetrate the ground and raise the water level without reducing the effect further down the line. It helps refill the wells which are currently dry, hopefully with enough water to last until the monsoons come again. It will also help the farmers with a second crop per year.

By the time we were due to leave, the dam was up to height but still had the wing wall and the top sides  to be built. This will take 15 days of hard labour by the villagers and we know they will complete because it means so much to them. 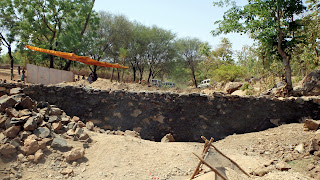 On our last day the whole village turned out to celebrate with us. They danced, sang songs and made speeches, prepared food and fed everyone including ourselves. 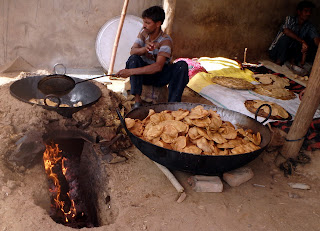 We in turn thanked them for their hospitality and wished them well for the future and hopes of a good monsoon. When we started out with this project we had no idea what we were getting into. But now we are much more aware of the plight of the farmers in Rajasthan. We understand more about their needs and their suffering because of the lack of water. 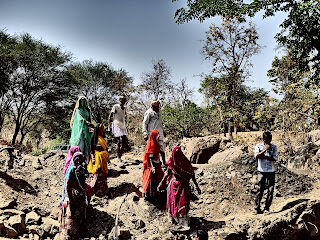 When we ran out of water to mix mortar, it was a hammer blow that made us realise how much we take water for granted here in the west. Driving across the dry landscape watching a dust devil twist across the work site lifting a column of dry dust high into the air, seeing animals made of just skin and bone. It enforces the need for more help in this area. 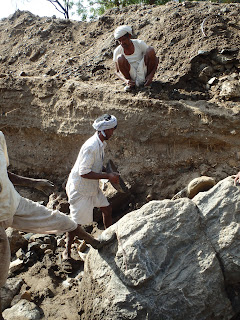 Without this Developing World Connections team, this project would not have happened. The donation content paid by each team member funded this project. Unlike some organisations who pool the funds to support its projects DWC actually funds the whole project through direct donation to cover the costs. These village farmers would not have had their sub-surface dam if it was not for DWC and the team of volunteers who made it happen. I, as their team leader applaud them for their generosity and hard work in giving their time and money to make this project a success. 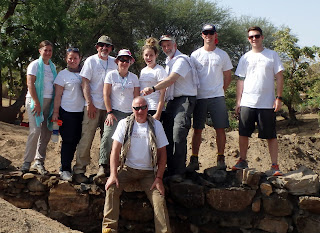 Our thoughts are with the people of Bargatua Kella and all those effected by the lack of water in Rajasthan and hope this years monsoon is a monster.

There are more photographs of the complete project available on my Picasa web site. This is only a brief synopsis of the project and to tell the story in full would require a book and a good author, that person is not me. But I will always be happy to bore you with tales from the trip should we meet in person.